Fast forward to Summer in Minot, 2013.  I got a wild hair to look for my Mark II.  I knew where it went, but after tracking through Mark II forums, I lost track of it when it went to Florida and that owner has never registered it to the point of tracking. So that leads me to look on line for any that might be for sale.  I found one in Morgan Hill, CA.  It belonged to an individual with some health issues, and he was trying to sell it. We “visited” many times over the phone about the car.  It was exactly like my original one, but it had air conditioning, whereas mine did not.  Air conditioning  along with front bumper guards, and tinted windows, were the only options for these cars.  They made around 3000 in 1956 and 1957.
Their cost new in 1956 was $10,000.  The power plant was a balanced 368 cubic inch engine.  They put 1000 miles on the 3 speed transmission prior to installation in each Mark II.  They were assembled in primer, fitted, then disassembled, painted with 14 coats of nitrocellulose lacquer, then final assembly took place and off to the new owners in protective bags.  Such owners as Liz Taylor, Elvis and Frank Sinatra were among the first to have these wonderful cars. 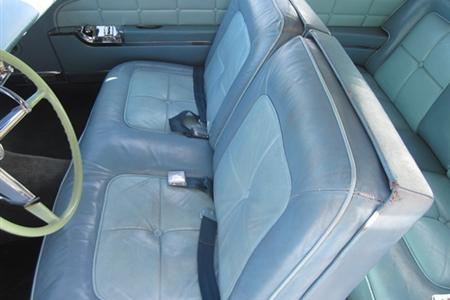 Now, I’m getting anxious about getting my driver’s license and I asked dad if I could take the Mark II for my test.  No problem.I think he let me do this because I took a special interest in the car.  We thought the trooper would really be wowed by the car, but never reacted one way or another.  I passed the test and then the driving began.  I didn’t drive it on any regular basis. I remember mom taking it to church some days, but other than that, we just had it around.  Now comes 1968, time to graduate and time for the Senior Prom.
“Yes, you can” were the words when I asked.  Well, I was in high heaven taking this car to prom.  Went to pick up my girlfriend and “BAM” she banged her knee on the pillar when she got into the car for that evening.  That sure ruined things from that moment on.  She wasn’t in a good mood after that!

Anyway, prep’n for a show was something else.  Back in those days, no detailer's were around; you just used wax and did a lot of rubbing.  I can remember
taking parts off of the engine and cleaning them.  I would take the valance panel off in front of the radiator, paint it light blue with a spray can,
cleaning the bolts with a wire brush, and polishing what I could under the hood.  Then it came to the hub caps.  Forty fins were individually bolted to each cap.
They were stainless, and they, of course, would get dirty.  I’d polish each one and cleaned behind the black area of the cap, then re-install the fins.
(Four caps equal 160 fins)  Then one time, I can remember taking off all of the fins and dad took the 4 caps to a body shop and had the black background
repainted a shiny black.  That was the last time I ever took the fins off of the caps.  From then on, they looked beautiful! 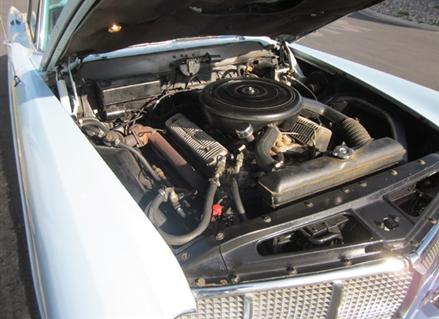 Anyway, in Sept 2013, I decided to wire-transfer some money to purchase the Mark!  Prior to its delivery, I was really excited to have one back.
The owner had described this car to a tee.  He was honest.  As a matter of fact, he told me more that was negative about the car, than was positive.
He originally stated that this one had not been restored…thus a survivor!  He did have the bumpers re- chromed, had new exhaust system installed, had
the brakes done and the carb re-built.  Other than that, it is original---right down to the insulation pad under the hood, the leather cover over the spare tire,
the original jack in its own leather case, and everything else. It is absolutely 100% complete.  He had a few spare parts such as hood hinges,
a new hood ornament and some miscellaneous other parts.  He had a can of touch paint and a nice car cover in the trunk with the car.  He also had
literature on the car, all of the receipts, and a history of the man that bought this car new.  He was an oil baron in Beverly Hills and he was a good friend of Ronald Reagan.  This would have been when he was an actor, not a politician!  So, it is safe to presume, that Mr. & Mrs. Reagan rode in my car.
I have driven the car about 140 miles or so, and now it is away for the winter—(storage again), but next spring and summer, I hope to put a lot of miles
on the ‘Ol Girl.

I hope to have many happy miles behind the wheel of this car.  It will be fun re-living the story I have told here and though not everyone will care, it will be fun driving around these vast open spaces in North Dakota to the different car shows.
I am fortunate to have the means and a loving wife who supports this wonderful hobby that I have.  She thinks I am ‘ill’  (I said ill, because saying that she thinks I am sick, just didn’t sound right!), but then again, many of us are “ILL”!!!
George Masters
Minot, North Dakota

Somehow, and I don’t remember how, I got the Mark II to Minot.  I had a single car garage and it went into that small thing (somehow).  I loved the Mark II and what a great history, but I was starting to get interested in Corvettes.  I had bought my first Corvette when I was on temporary duty in

Rantoul, IL.  I brought that to Minot and now have my 55 Chevy (another story), the Mark and a 64 Corvette roadster which I wound up trading for a 1963 split window coupe. The coupe didn’t run, but my 64 did, so the trade was good for both of us.  I fixed the split window Corvette and got it running nicely. The Mark II was in need of some rust repair, and the Corvette was needed full restoration and I just couldn’t do both. I ran an ad in the newspaper and sold the Mark II to a man in Forest River, ND.  I can remember borrowing a van and a trailer and hauling it to its new home, never again to be seen by me. I did, however, keep all of the literature that was accumulated from and about our car.  Who knows –someday I might just have another one!

Dad is getting older, and the Mark II became part of a “Do we really need this car” syndrome.  I had joined the United States Air Force, and was stationed at Griffiss AFB in Rome, NY.  I would come home quite frequently and ask about the Mark.  It was basically just sitting around, not being driven and that’s when I decided to ask to purchase it from my dad.  I was getting ready to re-enlist in the Air Force, and with that came a nice bonus, so that’s where I decided to “invest my money”.  I think I paid him $5,000 for the car.  At that time, that was a lot of money and I just wanted that car.
Being a young airman in my life, living in NY and having the car in PA, it still just sat.  I stored it in a few barns in Bethlehem and Lehighton, PA until
I thought the time was right to get it to Rome.  Eventually I got a garage and took it there.  I used it a bit, but nothing of any major significance.
Then I got orders to Minot, AFB in North Dakota.  WOW, where is Minot?  Well, I quickly found out.  In the winter of 1971 I moved my wife and all of our belongings from Rome to Minot.  That was in December, and the car went back into storage.

THE FULL STORY OF GEORGE AND THE  1956 CONTINENTAL MARK II
Way back when, a long time ago, my dad and I were talking, and he said:  “Hop in, I want to go look at a car”!  That’s when it began.  It was a June afternoon in Hecktown, PA, 1964.  I was a wopp’n 14 years old!  What are we going to see this time? -I said to myself. We wound up at “Continental Motors” the Lincoln-Mercury dealer in Easton, PA—right on the West end of Northampton Street.  We walked into the showroom, and there was a ‘light blue’ (the official color) 1956 Continental Mark II.  It was drop- dead-gorgeous.  I thought it was special. I had never seen one before, and I knew nothing about it.  I remember the price was $2,995.  Dad was talking with a salesman and I had no idea what was in store for the family here!  We went home and talked about the Continental.  Low and behold, two days later, it was sitting in our driveway.  I’ll never forget that car. It was long, lean, heavy and sharp as a tack!  Me being 14 years old, living in the country and not having a whole lot to do with spare time, I got to know this car really well.  My dad liked to go to car shows, so we would get the car all waxed up and off to shows like Hershey, Macungie and others around our small area of PA.  I still have some of the window registration cards from those shows and some original dash plaques from Macungie.  Both of those shows have grown to massive proportions. 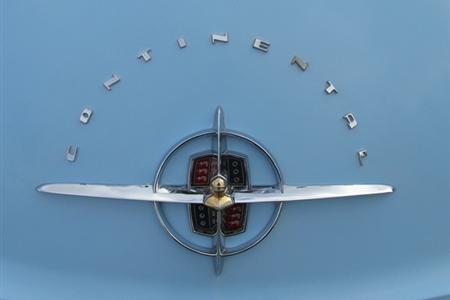